We all should be more caring 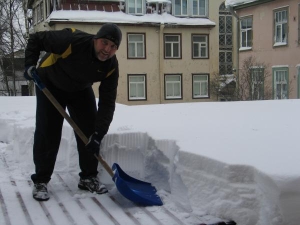 Sven is always trying to learn from past experiences and fears not to make decisive steps for the future. Several of the companies he founded at the beginning of 1990’s have shown great success in the Estonian market. His other undertakings, both in the private and public life have also been a success. But unlike many other “rich and beautiful”, Sven has not become self-centered braindwarf, who cannot see beyond the boundaries of his own world.

“There is no place for a society, where some people enjoy good life and some experience only difficulties,” says Sven. “Sooner or later this will result in an internal crisis which ultimately inhibits the development of society.”

Sven is in favor of liberal economy, yet he believes that the society should support its weaker members – children, families, people with disabilities. However, it must be done in a rational and economic way, so that the aid reaches those in most need.

Sven does not tolerate the so-called tough guys who think that the world is theirs only and that those who cannot afford an expensive car, a house, only a few meters from the beach, etc and a philosophy of the redneck type of guy (called “rullnokk” in Estonian), may simply be trampled down… Sven is willing to lend his helping hand to anyone in need. He has been a member of the Lions Club Tallinn VIA since the second half of the 90s. Lions´ daily tasks include various charity projects starting from those related to providing clothing for the homeless, supporting of children’s homes and ending with planting of young forest.

“I’m not so rich to help everyone with my own money,” he adds. The Estonian people, however, are ready to help. They just need a push by someone.”